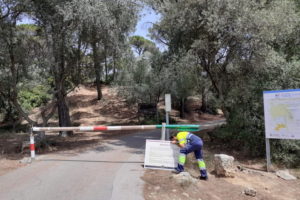 After the summer season where traffic was cut due to the high risk of wildfires, it has been re-established.

This summer has been complicated in terms of heat and drought and the access to the Natural Park has been closed even for pedestrians during some weeks.

The City Council of Torroella de Montgrí remarked that the cooperation of the citizens has made possible to have a quite summer without important incidents.

Despite the fact that motor vehicle traffic has been re-established, caution is still needed to enter into the natural Park as we are still in the hight season of wildfires. In fact, until October 15th it is forbidden to make fires in forests lands and in the 500 meter strip that surrounds them.

1
Do you have any questions?
Powered by
Tourist information : Monday-Friday: 10-17h
Saturday - Sunday - Holidays: 10-14h
Hello! Can we help you?