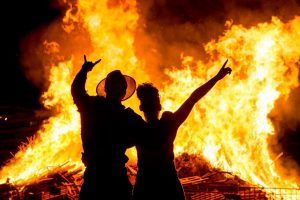 Saint John’s Eve has various activities, some mobility alterations and will be celebrated in a context of high risk of forest fires due to the drought that affects the whole country.

One of the central events of this festivity is Itaca Festival, which is going to take place on the beach of L’Estartit with three days of concerts.

Apart from this festival there are activities such as the arrival of the Canigo’s Flame to Torroella and L’Estartit, street music and a ‘correfoc’ (fire street parade)

In L’Estartit, the 23rd, 24th and 25th June it is recommended to park in the two large parking areas at the entrance of the village, one in front of the Masia and the other near the Skate Park area on Freu Street.

On the same days it is forbidden to park on the Passeig Maritim from 8am to 7pm and traffic will be closed in that area from 7am to midnight.

The drought that is affecting the whole country will force to extreme precautions with the use of firecrackers and fireworks. In L’Estartit the beach car park has been set up as the place for this activity.

It is recommended not to fire rockets with hands, not to attack street furniture or private property and avoid placing firecrackers in places that could explode, such as bottles. It is also asked to close windows and remove clothes or other flammable materials from balconies, among other common sense recommendations.

To make fires it is mandatory an authorization from the Catalan Government and it is forbidden to do it on a forest land and in the strip of 500 metres that surrounds them.

SAINT JOHN’S EVE IN TORROELLA AND L’ESTARTIT (In Catalan)

TIPS FOR A SAFE EVE

1
Do you have any questions?
Powered by
Tourist information : Monday-Sunday: 09-21h
Hello! Can we help you?